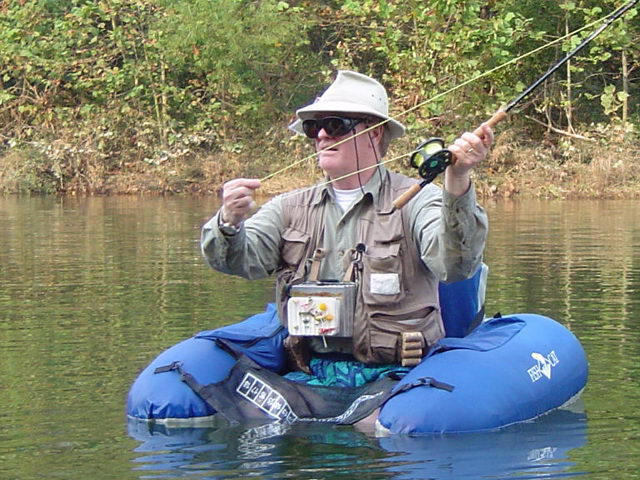 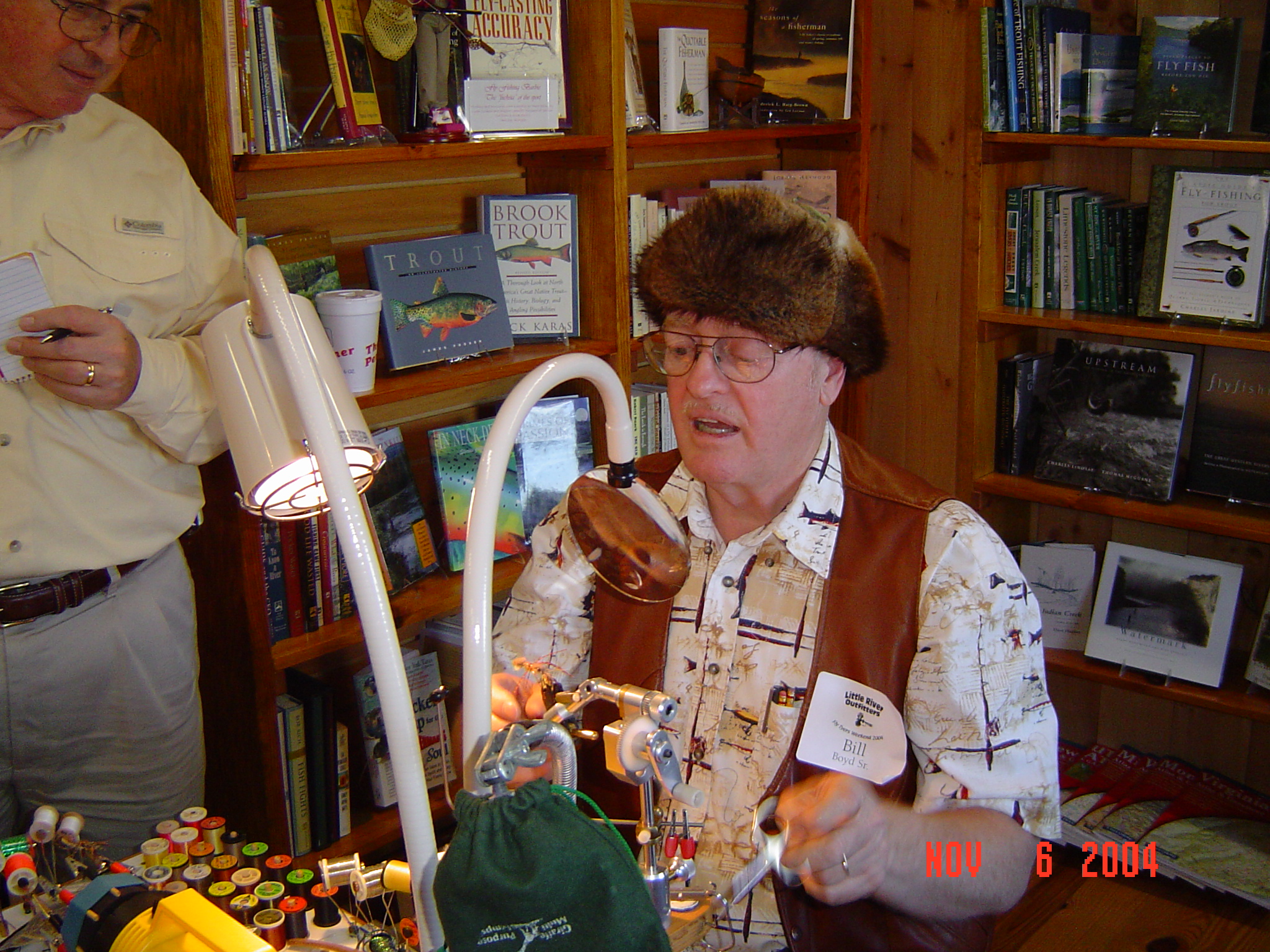 Dr. William Boyd, Sr., a.k.a. “Knack”, is the elder member of the Dubbing Teasers Fly Tying Team. Knack is a member of Trout Unlimited Appalachian Chapter. He is also a member of the Fly Fishers International. His signature fly, the “Hiwassee Streamer” has been showcased in Fly Fish America Magazine. He is also known for tying “Knack’s Mudbug” (Crawfish Pattern), Tandem Tellico Nymph, the “Glint” Dry Fly, and the “Toilet Tank Floater”.

In addition to being known for his inventive fly tying techniques, Knack’s mechanical inventions are often conversation pieces. His “Natural Light Simulator,” that demonstrates how changing light actually produces color changes in natural nymphs, is typically received with great interest and enthusiasm.

William, Sr. started teaching fly tying in the early 60’s and brought his son (Nick) into the craft as soon as he was old enough to hold a bobbin. In the early 1960’s, while teaching in Junior High School, William, Sr. sponsored a fly-tying club where he helped to advance the fly-tying hobby by sharing his knowledge, skills, and enthusiasm with numerous students. He is known for designing and inventing a wide array of fly tying techniques, tools, and devices for the sole purpose of simplifying and enhancing the enjoyment of the tying process. Knack has been fly fishing and tying flies for over 6 decades!

William, Sr. holds a doctorate degree in Music Composition from LSU. In his career, he has been a college professor, teaching a wide variety of courses in the field of Music Composition and in his retirement, he serves as a United Methodist minister for a local rural church.

His motto is “In life, every man needs a vice. Mine’s a Renzetti!” 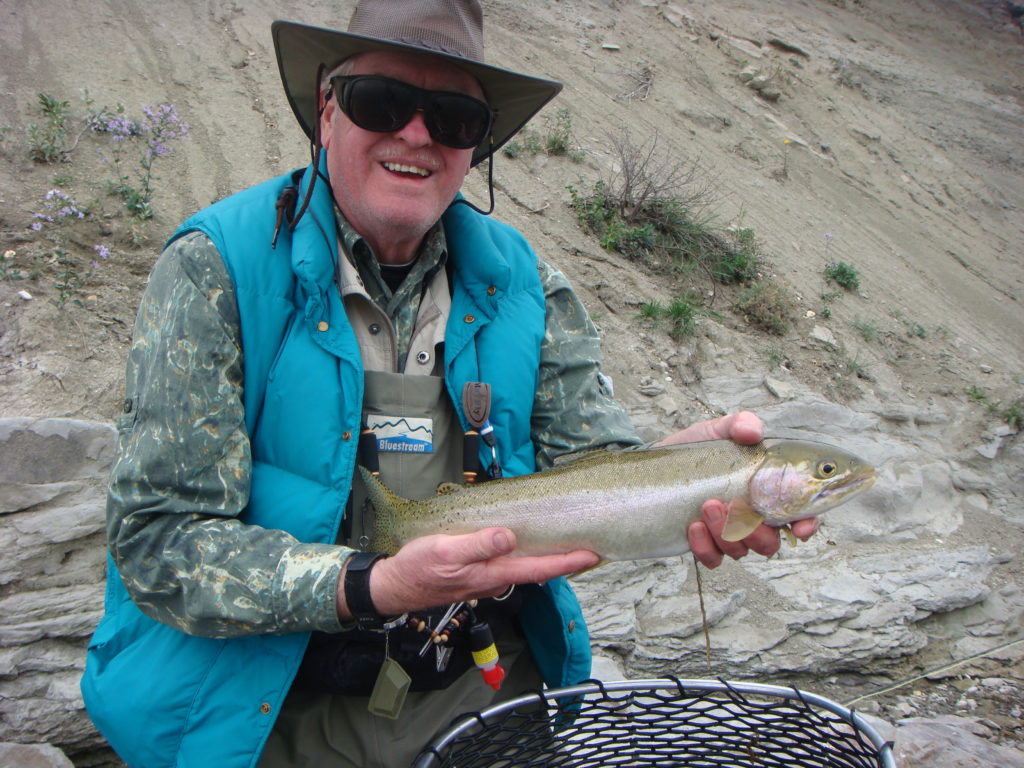 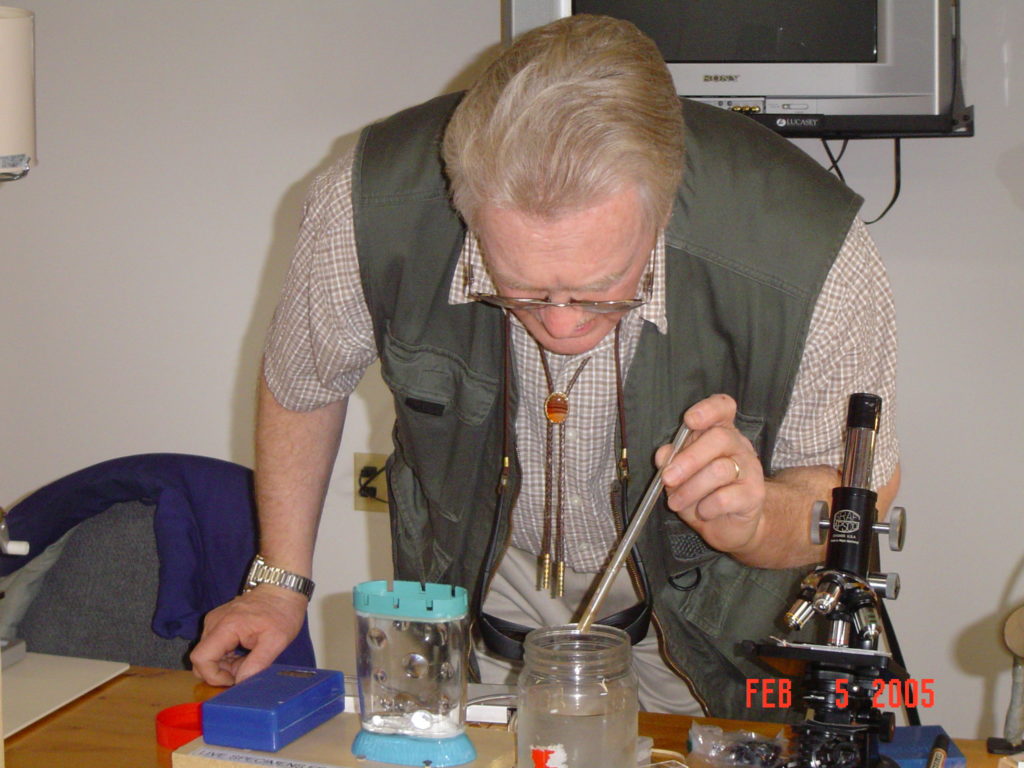 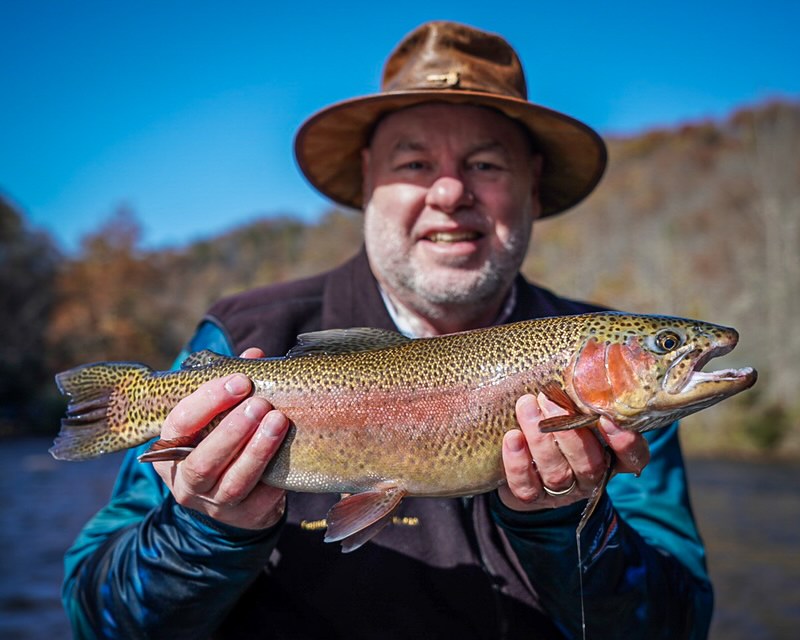 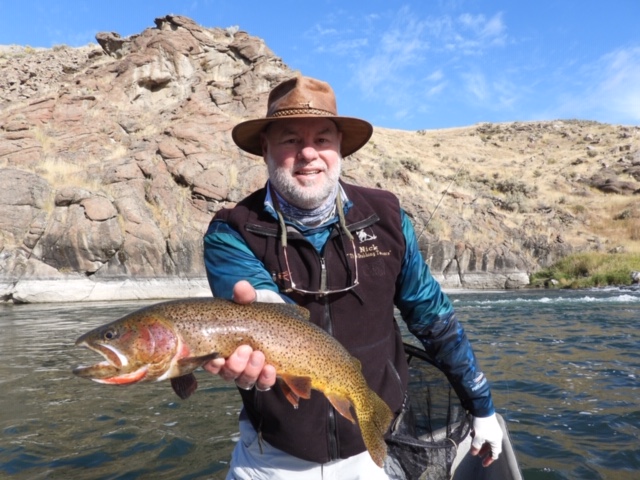 Dr. William Boyd, Jr. aka “Nick” is a member of the Dubbing Teasers Fly Tying Team and he also has written product review articles for Fly Fish America Magazine. He is a member and past Vice President of the Chattanooga-based Appalachian chapter of Trout Unlimited. He is also a member of Fly Fishers International. He was the 2006 fly casting champion of the Appalachian TU Casting Contest.

Bill is an avid fly fishing angler and has fly fished and tied flies for nearly 60 years. He ties a variety of speciality flies, Nymphs, Streamers, Wet Flies, Realistic Spiders, and Dry Fly patterns for Trout as well as assorted warm water species. His signature flies, the “Tennessee Stonefly Nymph” and "Two-Toned Stone", have been showcased in both Fly Tyer and Fly Fish America Magazines.

Bill enjoys fishing a wide variety of waters, including small mountain streams, large tail waters, lakes, and ponds. Fishing for native trout in freestone streams continues to be his overall favorite, as this is what he cut his teeth on as a boy growing up in eastern Pennsylvania.

Professionally, William Jr. is a Licensed Psychologist with forty plus years of clinical experience. He is currently in private practice through SteppingStone Retreat For Enhanced Living LLC and is the director of mental health services in three nursing home facilities. He was on the adjunct faculty of Chattanooga State Community College for 11 years. He is also an accomplished percussionist and professional storyteller. His enthusiasm for this wonderful pastime is contagious and captivating.

Nick’s motto is “I never met a fish that I didn’t like!” 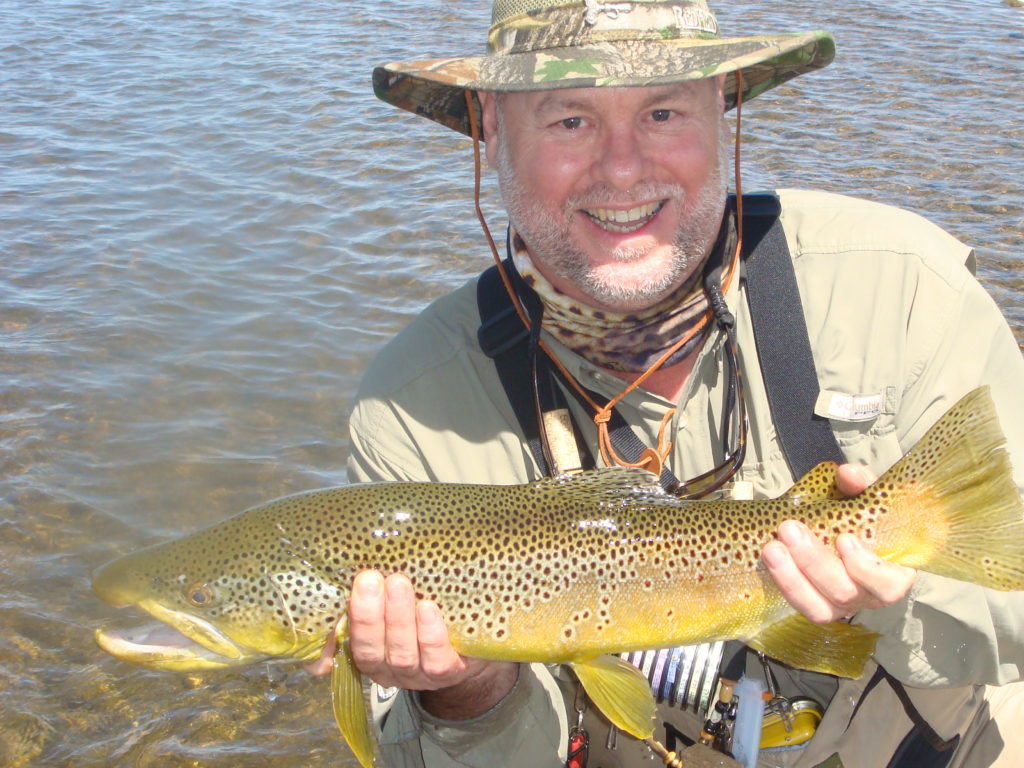 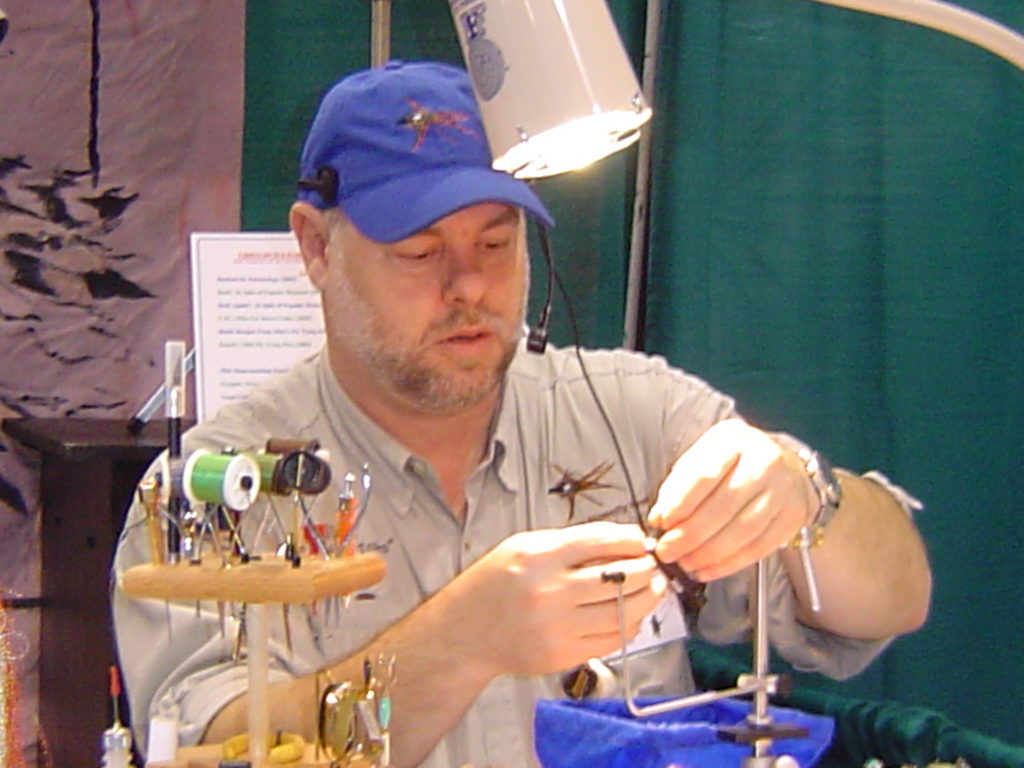 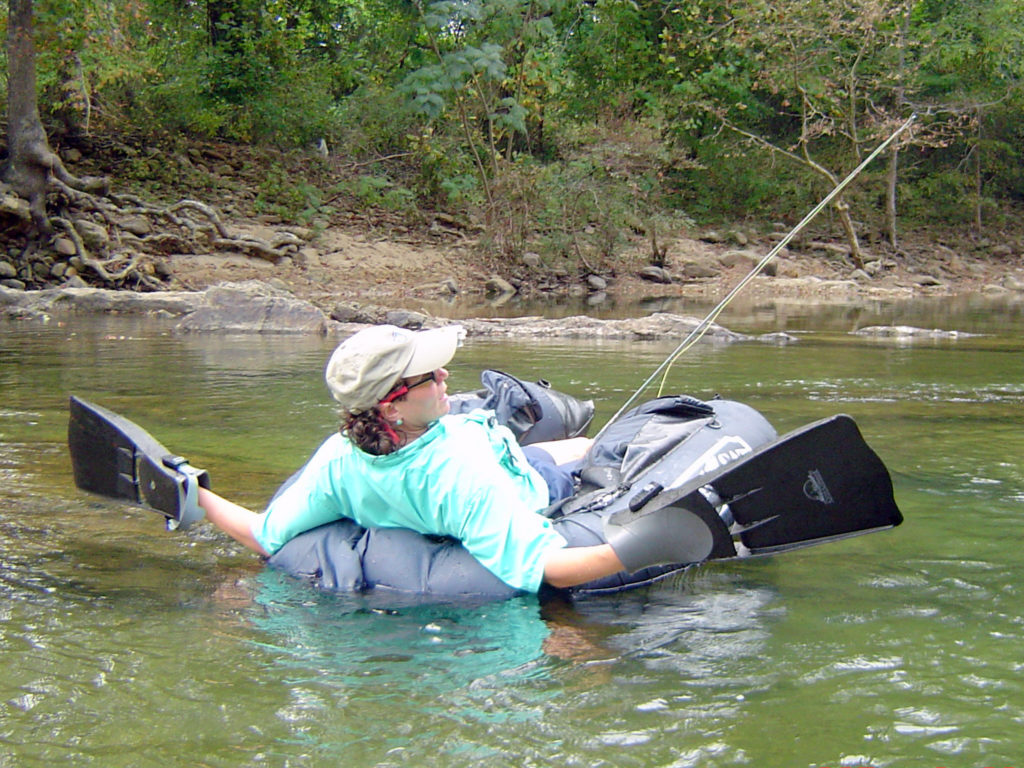 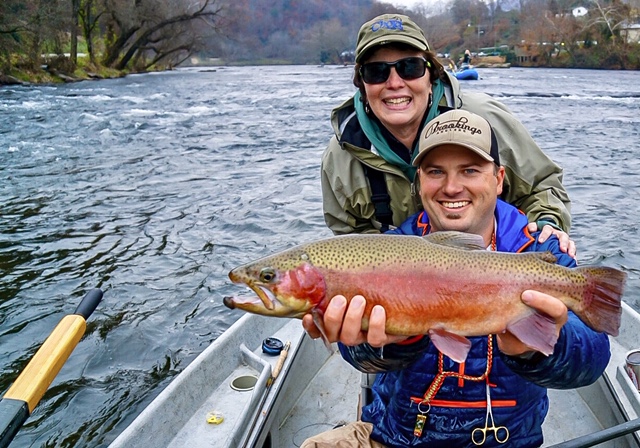 Wendy Williams-Boyd (F.M.) is the best looking member of the Dubbing Teasers Fly Tying Team, and lives in Dayton, TN as well with her husband, William, Jr.  She is a member of the Appalachian Chapter of Trout Unlimited in Chattanooga, TN and also a member of Fly Fishers International. Her favorite fishing waters include many Smoky Mountain National Park streams, the Clinch, Hiwassee, South Holston and French Broad rivers. Starting out with the Dubbing Teasers as their qualified expert behind the video camera and Director of “Crowd Control”, she quickly demonstrated advanced skill with a fly rod and shortly after that behind the fly tying vice.

Her signature flies include the “Foxy Lady” Nymph, Celtic Delight Wet Fly, Root Beer Tellico Flash Nymph, and the “Christmas” Bugger. Her Foxy Lady Nymph was published in the show case section of Fly Tyer and Fly Fish America Magazines. Her enthusiasm and animation for the sport of fly-fishing and fly tying has been rated as a 10 on a scale of 1-10 by regional experts.

Wendy has been a nurse for over 40 years and is currently a clinical nurse liaison at Erlanger, which is a trauma hospital in Chattanooga, TN. She received her academic and clinical training from Princeton School of Nursing.

Wendy’s motto is “I consider it to be a successful fly tying experience if I didn’t glue my fingers together!” 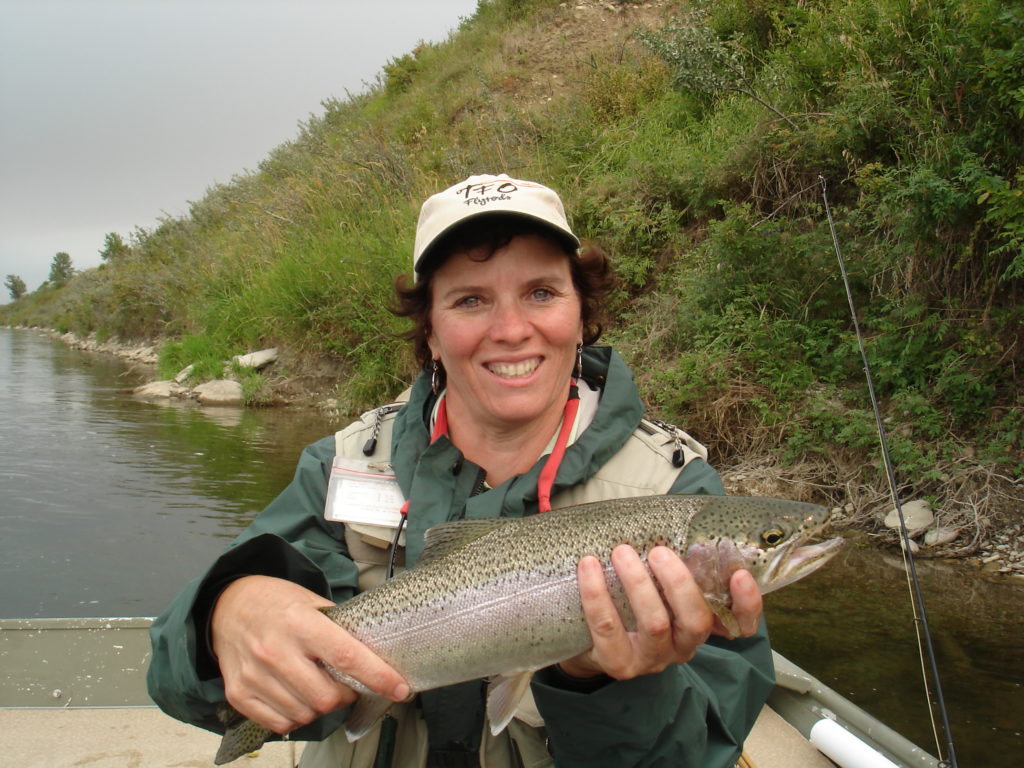 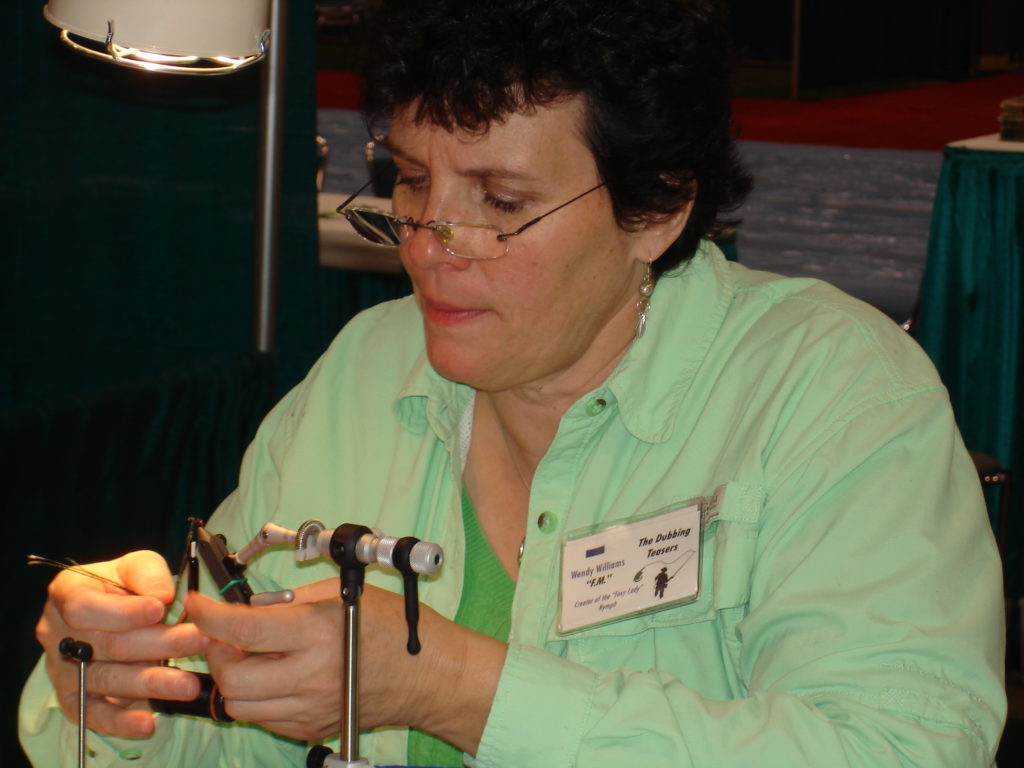 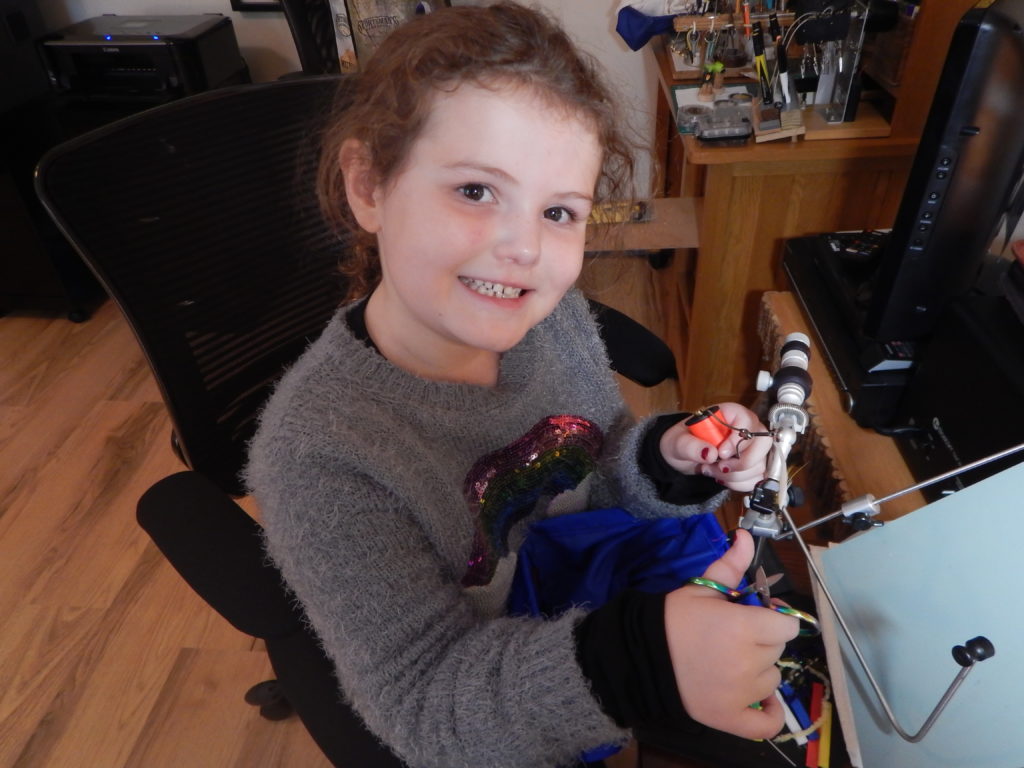 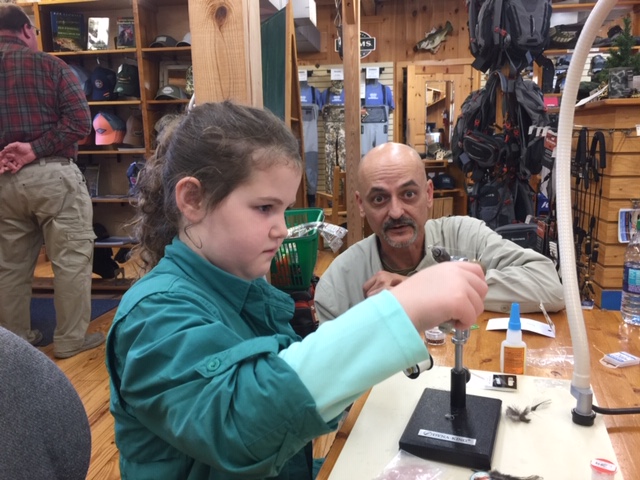 Jocelyn Johnson (“Half Hitch”) is 9 years old and in the Fourth Grade. She has been tying flies since she was 5 years old and she likes tying warm water flies for Blue Gills, Largemouth Bass, Red-Eared Sunfish, and Black Crappie. Her favorite place to fish is Hastings Pond located near her residence. She enjoys creating new fly patterns using interesting color combinations and sometimes she discovers ideas for new fly patterns from her subscription to Fly Tyer Magazine.

Her favorite flies to tie are Foam Beetles, Wooly Buggers, Popper Bugs, and Dragons. She designed and created the “Fire Booty Dragon” which is effective in catching all her favorite warm water species of fish. She has also created the Yellow Headed Soldier Fly, Royal Greenie Weenie, and Rainbow Whip Finish Streamer. Another fan favorite she designed and created is her own twist on the Wooly Bugger - The Space Bugger.

She is the youngest member of the Dubbing Teasers Fly Tying group and takes her fly tying seriously. She has a portable fly tying kit that she takes to her grandparents’ house as well as her Nanny’s, where she practices her techniques and makes up new fly pattern designs. She really enjoys using the flies that she has made to successfully catch fish, which she immediately releases.

Half Hitch's motto is "For security, I always include a half hitch between every step!" 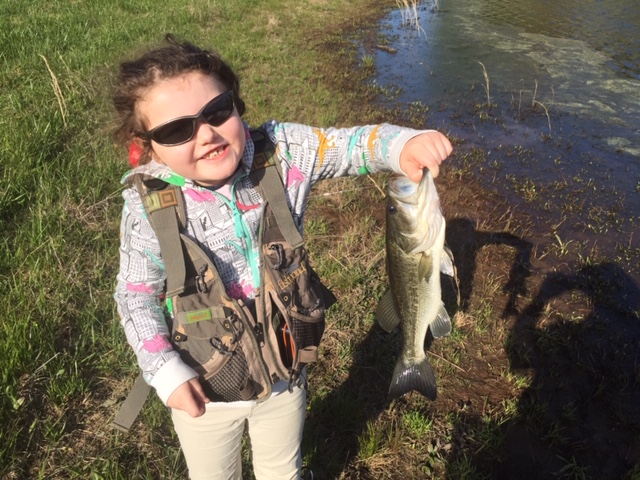 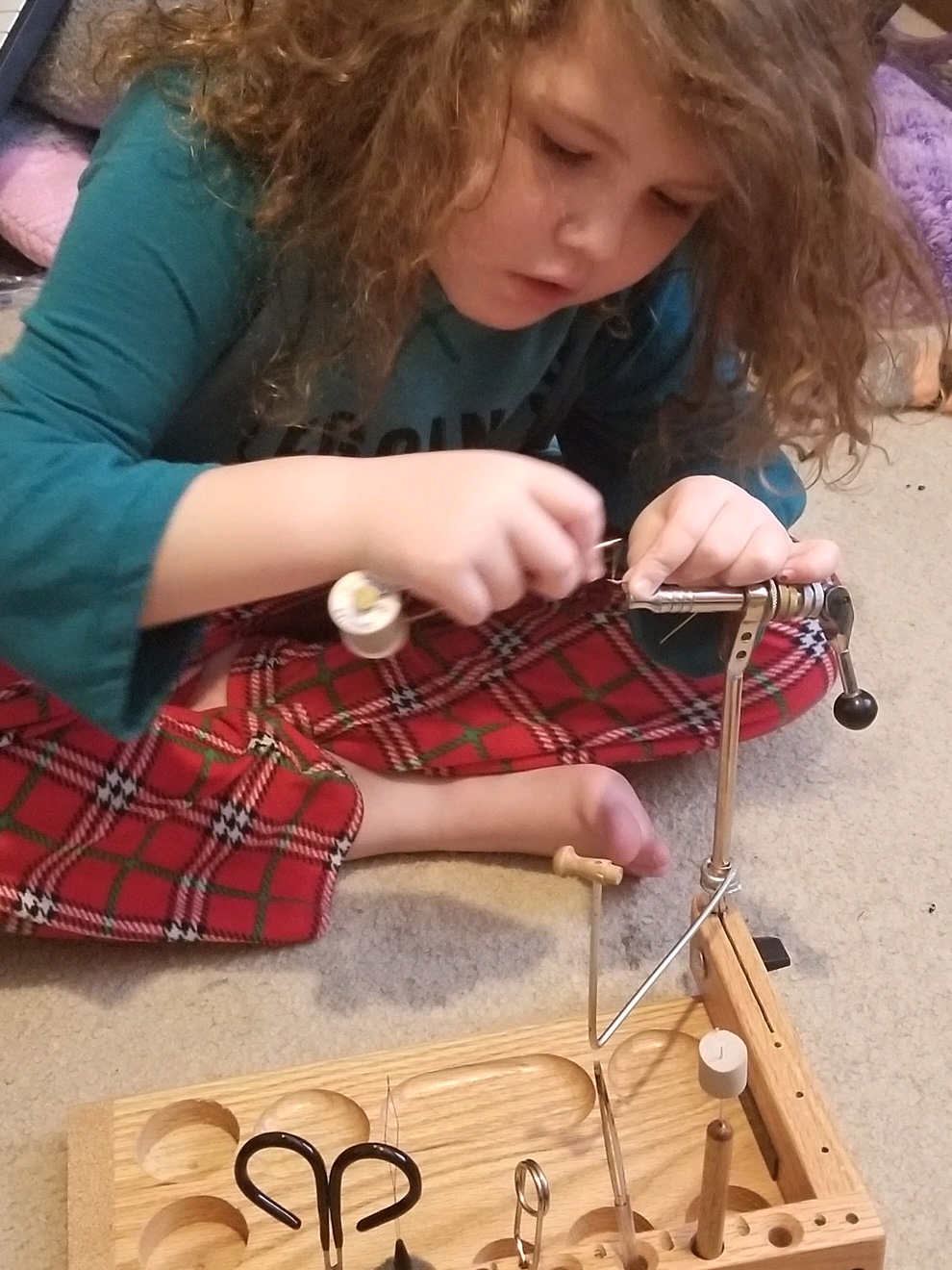